The Hopi Tribe’s water rights will be tried in several phases. The first trial begins on September 11, 2018. In the first phase, the court will hear testimony about the Hopi Tribe’s past and present uses of water in the Little Colorado River basin. The second trial begins December 2019. In the second phase, the court will hear testimony about the amount of water necessary for the Hopi Reservation to serve as a livable and permanent homeland for future generations. A third trial for the ranch lands south of the Hopi Reservation will likely be set in 2020 or later. The judicial proceeding will determine water rights for our children and grandchildren. 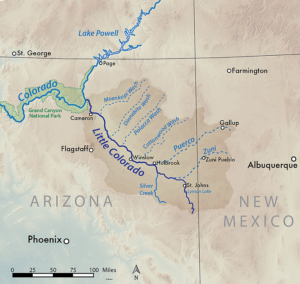 In trial, the long history and unique culture of the Hopi Tribe in Arizona will be presented by both witnesses and documents. Over a millennium, the Hopi Tribe has endured enormous hardships to sustain its way of life and developed a unique agriculture to sustain itself in a harsh and dry environment. There is still a long road and many trials ahead before resolution of all claims. At each step of the way, the Hopi Tribe will continue to seek a just resolution of claims with its neighbors in the Little Colorado River basin.

You may have missed